Adventures in the Catalan Pyrenees 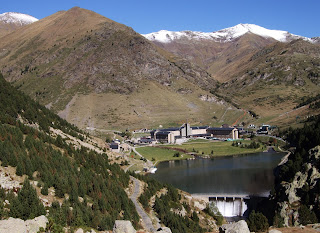 It doesn’t matter how confident a person you are, when you are exploring a new area there are bound to be some confusions and uncertainties. Nuria on the first day of my Pyrenean adventure provided plenty. I had read the tourist book and the trekking guide and had the map folded at the right place.  There are five main paths shown leaving Nuria (with additional paths leading off from these). However, apart from the “safe” path, the GR 11 heading back to the valley, there was no signposting of the paths heading into the mountains.  Hardly surprising as Nuria attracts many daily visitors, and no one wants ill equipped people venturing into the mountains. My dilemma was which way to go to exit a complicated ski / railway / hotel / visitor complex?

A quick compass bearing gave me the direction and there was a convenient path following the ‘stations of the cross’ with some impressive sculptures interpreting this religious theme. Ten minutes later saw my pilgrimage complete at a signpost showing that I’d come the right way. Thank you God!

I was researching new walks to lead with clients. Therefore I was a little concerned that the path was signposted the “engineers” path. My mind was racing as to what had been engineered and what obstacles lay ahead, a path cut through precipitous drops, sections of ladders and ropes to climb, etc.  In the event I needn’t have worried for this turned out to be a great path, fine views and not really “exposed.”  A couple of small rock steps and a cable descending a shallow gully were all that needed care. It was on this section that I met the only people I saw all day, two shepherds tending their flocks on high alpine pastures.

I had been wondering where the hut was. You do not see the Refugi Como de Vaca from this direction until you are almost on top of it.  Being mid October it was closed, though a bright, clean and spotless winter room was open for people needing shelter.  It was time for lunch, but as the path back to Queralbs started on the other side of a sizeable river opposite the hut, I decided to make my crossing first. Putting all my M.L. / I.M.L. training into practice I hoped boulders up and down finally arriving at the signposts on the other side with only one wet boot.  Imagine my indignation when one of the signs pointed to a bridge! I was so glad there was no one around to witness my folly!!  Actually the bridge was not visable from the hut being below a rock buttress and not marked on the map either. 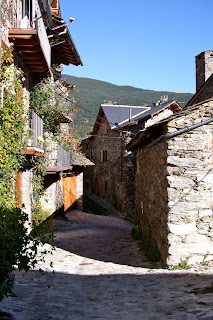 The long descent to Queralbs took three hours and was delightful passing through both alpine and sub alpine terrain with their associated flowers down the Gorges del Freser. A good well earned beer was enjoyed.

If you too like a refreshing beer after a good day out, read this!
Posted by Jane Livingstone at Thursday, October 28, 2010

Email ThisBlogThis!Share to TwitterShare to FacebookShare to Pinterest
Labels: Waling in the Spanish Pyrenees

Came across Mike Raine's book Nature of Snowdonia, whilst at Plas y Brenin recently.  A great introduction to the upland environment, for anyone working towards ML or IML awards, or just interested in knowing more about Snowdonia.  Has lots of interesting tit-bits about rocks, birds, insects, flowers, fungi, mosses & lichens and the impact of man in the mountains.  Easy to dip into, not too technical - to be recommended.