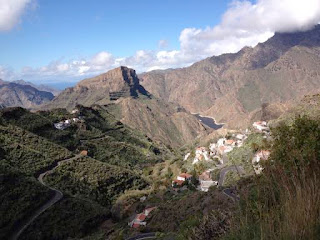 Dramatic mountain scenery, warm settled climate, a myriad of ancient trails, Spain, with just a touch of Africa!  These are just a few of the highlights of our trip to Gran Canaria in February 2015.

We were aiming for a week relaxing in the sun, but not really being beach people, the hills and mountains beconned from the very start, and we were soon driving towards the mountainous centre of the island, with increasingly dramatic scenery.

Gran Canaria is part of Spain, so our moderate Spanish was useful, though not quite the same as southern Spain, as we discovered when trying to order our usual 'tostada con tomate' only to find that toast was not usually eaten for breakfast, nor tomato and olive oil readily available!  However we saw lots of tomatoes growing near the coast, together with banana, mango and avocado plantations, some rather weird cacti, stunning bougainvillea and almond blossom. 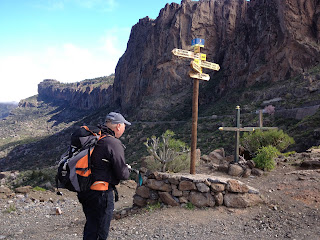 Back to the walking; many of the trails we walked were old Camino Reales - ancient trails, with a similar status to the English rights of way, which are gradually being restored and waymarked for walkers. Although there are coastal walks, the best routes we found were in the centre of the island, where the scenery is varied and often dramatic. We found ourselves walking through forest, hillsides covered in pink almond blossom, rocky, almost lunar Landscape, and lush green valleys; indeed a 'continent in miniature' as the island is sometimes described. 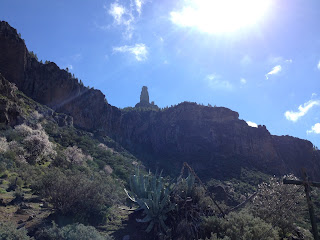 Probably our best walk took us to the summit of Pico de Las Nieves - no snow to be seen, indeed sadly not a lot to be seen the day we were there, as the final 100m was shrouded in mist!  However it was a great walk, with a wonderful descent through spectacular terrain.

We did have a couple of days exploring and particularly enjoyed wandering We around the fishing boats of Puerto Morgan, and dramatic drive northwest from the pretty village of All in all a good trip, with lots more walking to be done. We are already planning a return trip to lead a guided walking holiday on Gran Canaria in 2016 - everyone deserves a break from the British winter! So why not join us.